Recently, after a 2-month period of quarantine, the Acropolis has opened to the public again. The Acropolis Museum remains closed for the moment but the 11th anniversary of its opening to the public approaches, we look forward to a post-pandemic re-opening.

Yesterday, Emmanuel J Comino AM, the Founder and Chairman of this Committee said, “It is timely to reflect on the global significance of the Acropolis, and the Parthenon, as we wait for the anniversary. It is the most outstanding among all of the ancient sites on the Acropolis.” 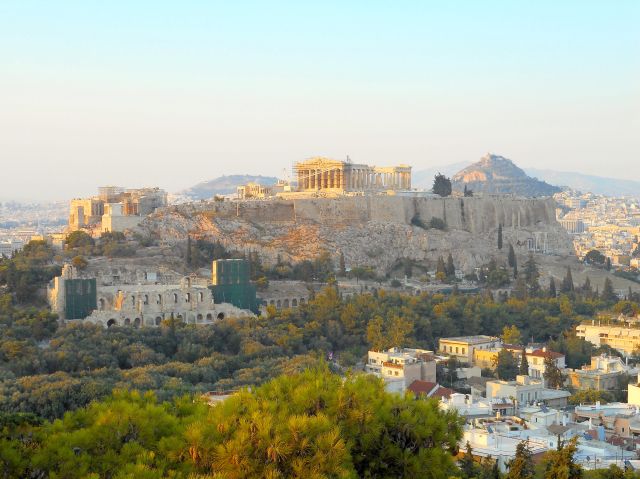 Mr. Comino went on to make the following points

While we wait for the opening of the Acropolis Museum, we are taking the opportunity to restate the reasons why we have been calling for the reunification of the Parthenon Sculptures, or as we prefer to call them the Parthenon Marbles.

Of course, the site has not always been in a state of peace.

In 1687 while Greece was under Ottoman occupation the Venetians, under Captain-General Francesco Morosini, mounted an attack on the Acropolis. At the time the Turkish garrison was using the Parthenon to store munitions. A Venetian bombardment ignited the explosives and caused extensive damage to the Parthenon. 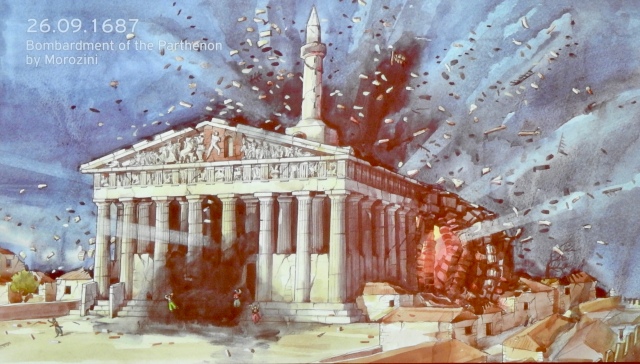 It was with the Parthenon in this damaged state, yet far from being a ruin, that Thomas Bruce, 7th lord of Elgin, began the removal of marble sculptures from the Parthenon. Beginning in 1801 and continuing up until as late as 1812, Elgin and his teams removed large quantities of antiquities from Greece, but the most notable and the most beautiful were the Parthenon Marbles.

When facing bankruptcy in 1816, Elgin sold these extraordinary sculptures from the Parthenon to the British Government. They are now installed in the British Museum. 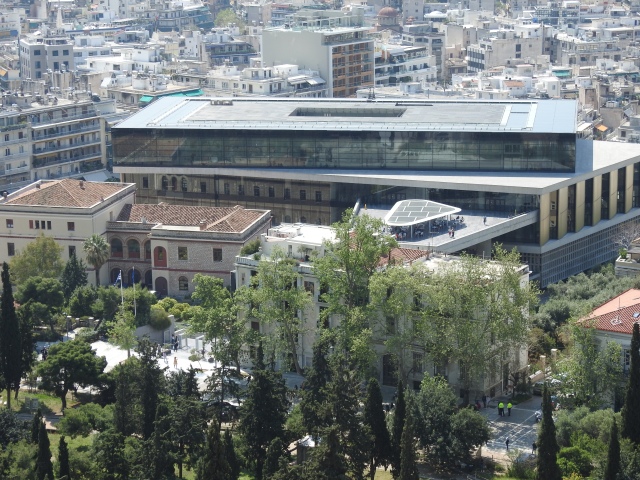 Why the Parthenon Sculptures should be returned by the British Museum.

1. The sculptures from the Parthenon, the Parthenon Marbles, otherwise known as the Elgin Marbles, are an integral part of the Parthenon. This beautiful Doric temple is the architectural wonder of the world. No other building has ever equalled its beauty, symmetry, and symbolism.

2. When we speak of the Parthenon we are not speaking of a single column or a single statue we speak of an integrated architectural, artistic, cultural, and spiritual expression, a unique symbol of Greece.

3. The Parthenon as an integrated whole has also become a symbol of Western civilization, and a global icon. Such a symbol is not divisible.

4. Lord Elgin was given permission to make architectural drawings and plaster casts from the Parthenon to improve the fine arts in Great Britain. He was also permitted to expose the ancient foundations and to remove fragments thrown to ground by the 1687 explosion. He was never granted permission to remove anything from any buildings on the Acropolis.

5. Greece had no say in the matter. Elgin took the Marbles from Greece while the country was under Turkish occupation. This was during a time when larger powers were pillaging antiquities from smaller countries, notably Greece and Egypt. Also, Britain was the dominant power in the eastern Mediterranean at the time.

6. The British Museum has not protected the sculptures. In the period 1936-1939, the sculptures were irreparably damaged when they were scrubbed back to make them white, destroying their patina of ancient colours. Today the sculptures in the Athens museum are in far better condition than those in the British Museum, they are also being cleaned with the latest laser technology to retain their ancient patina. 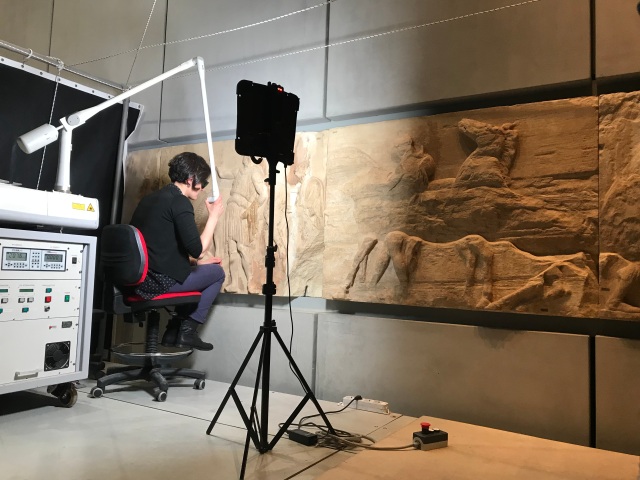 7. The British Museum does not display the sculptures in a manner that is meaningful to the world at large. They are presented as mere specimens, as curiosities, facing inwards not outwards to the world. They are kept in a room with poor lighting, inadequate climatic controls, and a skylight that sometimes leaks. Out of context in this poorly conceived space, it is impossible to gain a full understanding of their meaning. 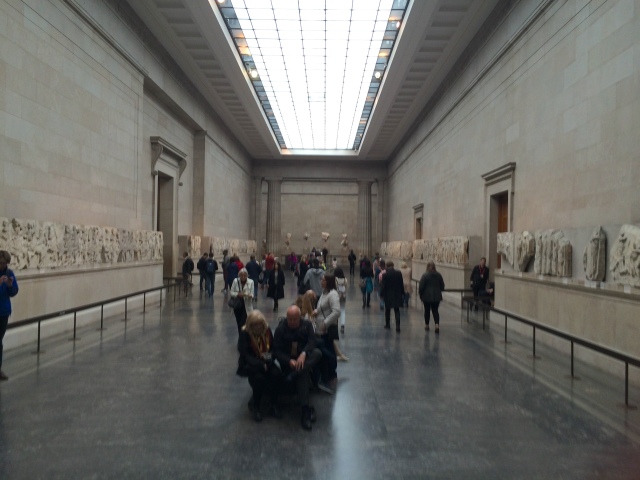 Figure 5 The gloomy hall, Room 18, where the Parthenon Marbles are kept 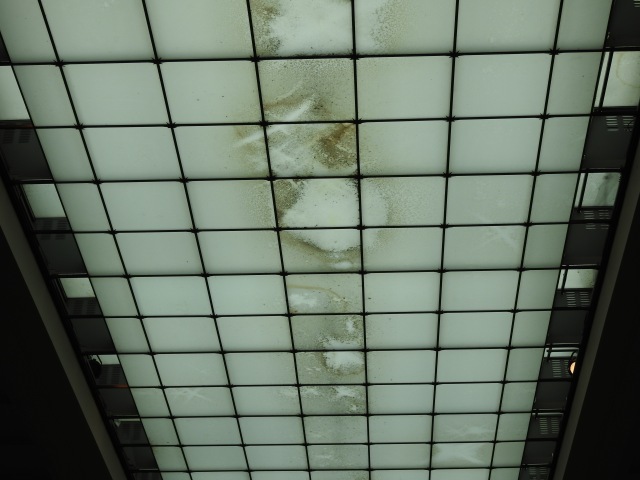 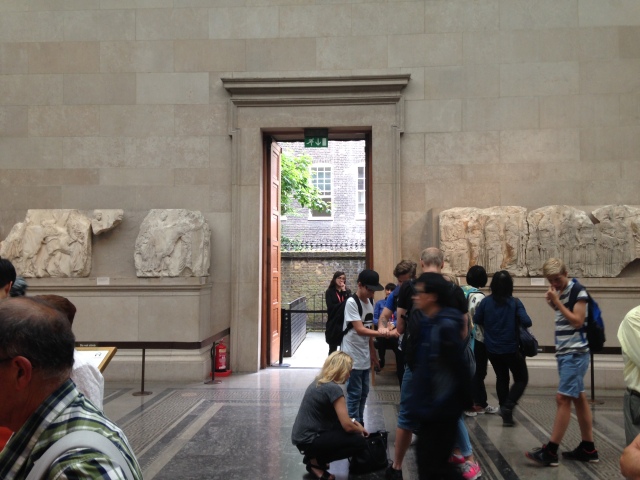 Figure 7 Unlike the state-of-the-art Acropolis Museum the British Museum has the Parthenon Marbles in a space without effective climatic controls. This was a mid-summer’s day

8. In recent years the British Museum has divided the collection lending a sculpture to Russia and then moving others for specific exhibitions within the Museum. This further obscured their meaning. 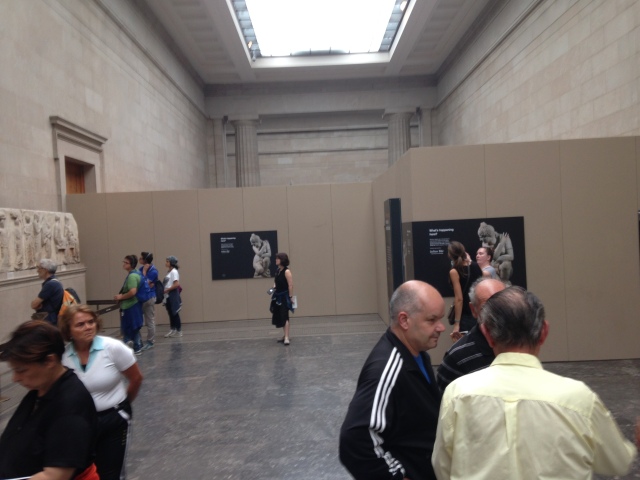 Figure 8 A hoarding covering the space from which sculptures have been removed for the ‘Defining Beauty’ exhibition in 2015.

9. For years opinion polls and surveys in the United Kingdom have shown strong support for the return of the Marbles. Anyone visiting the Acropolis and the British Museum can see at firsthand the injustice of the British Museum and Government’s refusal to return them. Britain has an opportunity to show leadership in addressing cultural property disputes by returning the Marbles.

10. The Acropolis Museum has dedicated a special place for the Marbles. Here those remaining in Greece are displayed in the correct orientation, within clear view of the Parthenon, where they are bathed in natural light in the very context that gave rise to them and. It is time to correct a long-standing wrong and reunify these outstanding works.

The Parthenon Marbles cannot be separated from the context that gave rise to them.